Wiwat Nuansing, Pre-doctoral Researcher in the Self-Assembly Group at nanoGUNE, received his PhD at the University of the Basque Country (UPV/EHU) after the defense of his thesis project on Monday 23 June 2014. He carried out his research work, entitled Electrospinning of Biomolecules, under the supervision of Dr. Alexander Bittner, Ikerbasque Research Professor and Leader of the Self-Assembly group.

Electrospinning is a simple and versatile technique used for the fabrication of continuous micro and nanofibers, mainly from polymer solutions and polymer melts. The process is based on applying a high voltage (kV range) to a liquid, which forms a jet that can be collected in dry form on a grounded substrate. Nonpolymeric molecules (monomers) can usually not be electrospun, they have to be mixed with polymers to achieve sufficiently high viscosity and intermolecular entanglement in solution. However, many peptides and proteins can self-assemble in 3D (bulk crystals), in 2D (for example membrane proteins), and in 1D (natural fibrils) by intermolecular interactions, e.g. Van der Waals, electrostatic interactions, hydrogen bonds, and π-stacking interactions. 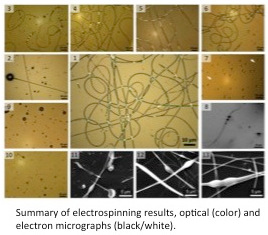 Wiwat Nuansing demonstrated that the electrospinning of biomolecules (polymers and also molecules/monomers) is possible in pure form. For this, they have to show self-assembly in 1D, 2D, or 3D; they have to be dissolved in a suitable organic solvent at high concentration; and the electrospinning parameters have to be optimized. Based on these conditions, short aromatic peptides and globular proteins can be spun into continuous fibers. Furthermore, techniques such as microliter electrospinning from a single droplet can produce protein nanofibers equally well. For some proteins, the fibers contain short stretches with diameters down to 5 nm, close to the size of a single large protein molecule.