An international team of researchers, including members of nanoGUNE's Nanooptics group, publish in “Science Advances” the grounds for the realization of nanodevices that, based on the manipulation of light at the nanoscale, promise the development of extraordinarily sensitive biosensors. The researchers also designed gold nanoantennas that allow obtaining extremely small (600.000 times smaller than the size of a grain of sugar) and bright focal spots. This achievement opens new avenues for the detection and control of single molecules, such as glucose, and atmospheric contaminants. 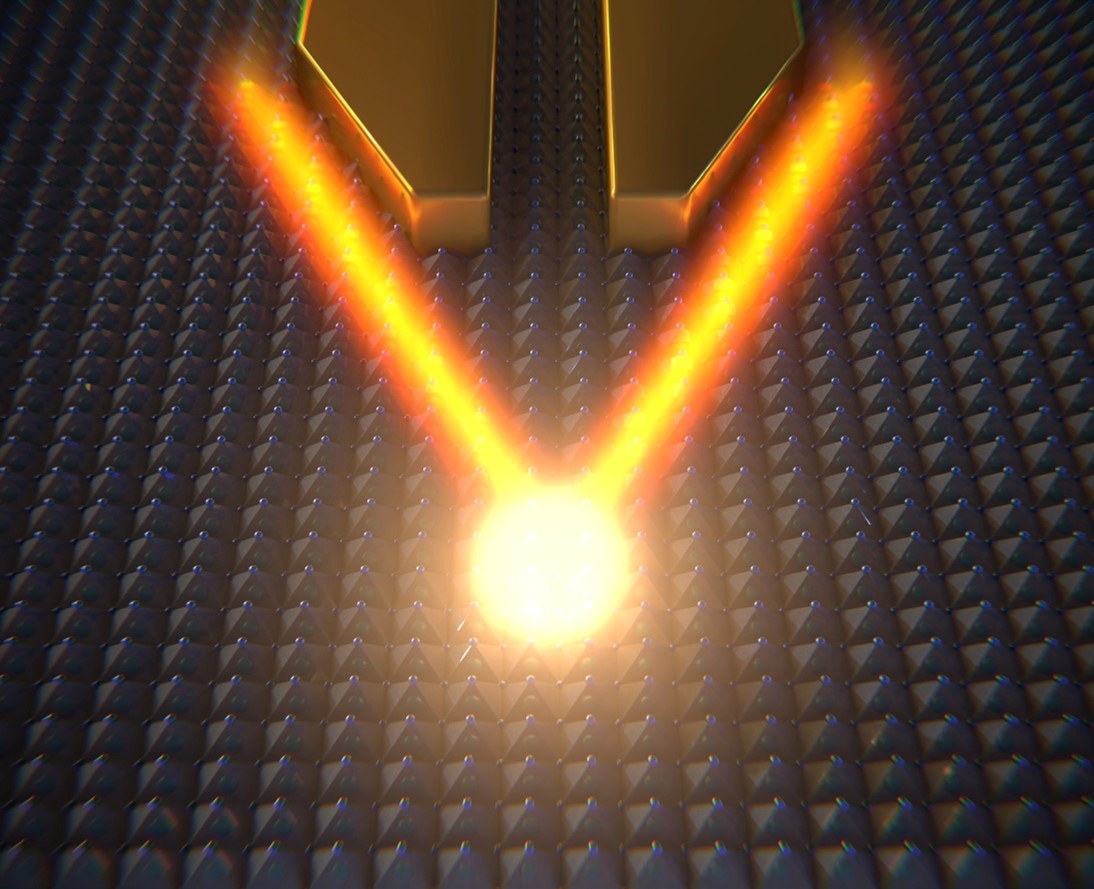 Focusing of light into the nanoscale represents a landmark for the implementation of nanotechnology in optics and biochemistry. Based on the exotic propagation of light in highly anisotropic materials (where light propagates in the form of rays along specific directions), a research team led by the University of Oviedo has demonstrated the focusing of infrared light into extraordinarily small regions. This achievement is a significant step for the development of novel technologies based on the manipulation of light at the nanoscale (nanolight), such as single molecules sensors (glucose), toxic and/or cancerous substances, or chemical reactions catalysts.

The development of energy efficient and ultra-compact photonic devices critically depends on our ability to manipulate the propagation of light at the nanoscale. To this aim, most current technologies in nanophotonics are based on the use of isotropic materials, which possess severe limitations, especially for guiding of nanolight along certain directions. However, in anisotropic materials, nanolight propagates along specific directions in a natural way, which enables a handful of interesting opportunities.

Now, an international team led by the University of Oviedo and the Nanomaterials and Nanotechnology Research Center (CINN) CSIC Spain, in collaboration with the Donostia International Physics Center (DIPC) Spain, CIC nanoGUNE Spain, Moscow Institute of Physics and Technology Russia, the Institute of Science and Technology Austria, the Huazhong University of Science and Technology China and the Monash University of Australia, has demonstrated theoretically and experimentally the focusing of infrared light into nanometer-size focal spots over the surface of molybdenum oxide crystals, a van der Waals material with strong optical anisotropy. Beside the potential development of ultra-compact biosensors in a planar platform, this achievement might have outstanding applications for the manipulation and routing of light, as well as heat harvesting and communication technologies.

Specifically, the researchers have designed gold nanoantennas with optimized geometries to achieve the efficient excitation of nanolight (in the form of polaritons, surface waves in the material) along specific directions as rays of light in molybdenum oxide crystals. By controlling the nanoantennas’ relative position on the surface of the crystal, it is possible to focus rays of light into a focal spot upon their constructive interference. Such focal spots present a high degree of nanolight confinement (intensity), as well as a higher optical absorption with respect to the foci obtained in isotropic materials under comparable experimental conditions. Moreover, the focal distance can be easily controlled by varying the geometry of the nanoantennas, which allows reaching values of the focal distance well below the limits achievable in isotropic media. The nanoantennas used in this work thus represent a first optical nanodevice for the future development of novel technologies in nanophotonics based on compact and planar platforms utilizing anisotropic nanomaterials.