Estitxu Villamor, Pre-doctoral Researcher at the Nanodevices Group at nanoGUNE, receives her PhD at the University of the Basque Country (UPV/EHU) after the defense of her thesis project on Monday 15 December 2014. Her research work, entitled “Injection, Transport, and Manipulation of Pure Spin Currents in Metallic Lateral Spin Valves”, has been developed under the supervision of the Nanodevices Group researcher and Ikerbasque Research Professor Dr. Felix Casanova Fernandez. 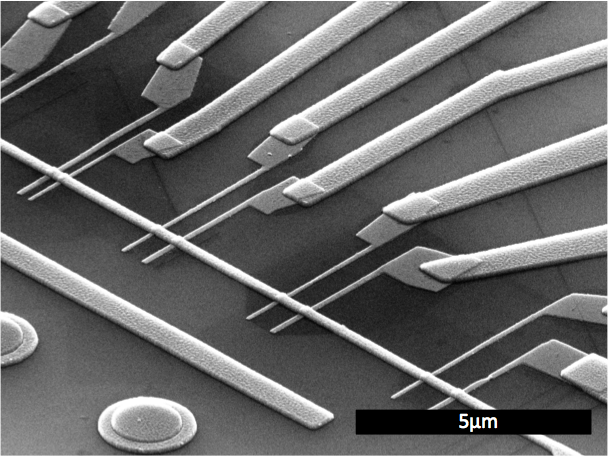 Villamor has focused her thesis on the development of spintronic devices as a promising option to provide an answer to the constant miniaturization of silicon-based transistors, which cannot continue indefinitely due to increasing power dissipation and the emergence of quantum fluctuations when fewer atoms are involved.

After the success of spintronics applications such as the hard-disk read head or the magnetic random access memory, based on the giant magnetoresistance effect in magnetic multilayers, the goal is to develop a second generation of spintronic devices, in which pure spin currents can be created and manipulated. These devices would provide a faster data processing, due to the added degree of freedom of the spin, together with a lower power consumption and heat dissipation related to the absence of charge transport. In such second generation of spintronic devices, achieving spin transport over long distances is crucial, for which materials with a long spin-diffusion length are needed.

Villamor studied the three key parameters for an optimum performance of these spintronic devices: spin injection, transport, and manipulation. With this purpose, she used metallic lateral spin valves (LSVs), nanoscaled devices consisting of two ferromagnetic (FM) electrodes bridged by a non-magnetic (NM) channel, which, by using a non-local geometry, allow the electrical creation of pure spin currents as well as their transport over a long distance, easily enabling their manipulation.

After proving the reproducible performance of her devices due to a nanofabrication based on two consecutive electron-beam lithography processes, where the FM/NM interface quality is carefully optimized, the spin-injection properties of Co and Py are studied and compared by obtaining the spin polarization of both materials as a function of temperature in Co/Cu and Py/Cu LSVs with trans- parent interfaces. The spin polarization of Py is higher than that of the Co, and it presents a clear variation with temperature, which is in good agreement with the two-channel model if the detected correction factor of ∼ 2 is applied.

The most widely employed spin manipulation technique in LSVs is the Hanle effect, which is based on the precession of spins under an out-of-plane magnetic field. In this thesis, Villamor used the Hanle effect as a tool for spin manipulation and also for obtaining information regarding the spin-injection and spin-transport properties of the LSVs. Devices with transparent interfaces and with a non-zero interface resistance are compared. Whereas the spin currents are effectively modulated in LSVs with a non-zero interface resistance and reliable information is obtained, in the case of LSVs with transparent interfaces interference effects are observed, which cannot be explained with the current theory.

Finally, a novel method for spin manipulation is proposed by magnetically gating pure spin currents. This is possible with the fabrication of LSVs on top of a ferromagnetic insulator (FMI) and taking advantage of the concept of the NM/FMI spin-mixing interface conductance. A theory is proposed in order to explain a modulation of the pure spin currents, which is experimentally proven in Co/Cu LSVs fabricated on top of YIG. The value of the spin-mixing conductance of the Cu/YIG interface is obtained for the first time and clues for improving such value, as well as the spin current modulation itself, are presented.