The Spanish Foundation for the Promotion of Research into Amyotrophic Lateral Sclerosis (FUNDELA) has awarded CIC nanoGUNE, a project to conduct research into amyotrophic lateral sclerosis (ALS), in collaboration with the ALS laboratory of the 12 de Octubre Hospital - “i+12” and the Genetics Service of the Ramón y Cajal-IRYCIS Hospital, belonging to the Center for Biomedical Research Network on Rare Diseases (CIBERER). 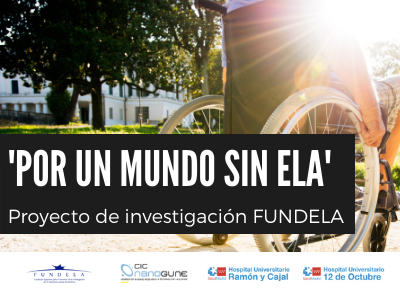 Amyotrophic lateral sclerosis (ALS) is an incurable, neurodegenerative disease associated with mutations in several genes. Its effects are devastating and deprive patients of their mobility, and therefore of an acceptable quality of life, rapidly and progressively with a fatal outcome. This is why the strategy for modifying the genes that cause ALS undoubtedly offers one of the best hopes for treating this disease. The CRISPR gene editing technology provides tools for such a strategy. Acting like a pair of molecular scissors, CRISPR technology is able to cut and paste pieces of genetic material into any cell. However, this technology has been around for barely a decade and still has a long way to go.

One of the most common and most significant genes in hereditary or familial ALS is the SOD1 gene. In this project, cells from selected patients with hereditary ALS will be worked on directly; an attempt will be made to correct or eliminate the damaged gene in order to obtain viable cells that do not have the genetic damage.

The project is led by Raúl Pérez-Jiménez from nanoGUNE, who has developed a novel gene editing tool; members of the 12 de Octubre Hospital - “i+12”, led by Alberto García Redondo, have obtained the genetic material to be modified; and finally, the team at the Ramón y Cajal-IRYCIS Hospital, led by Miguel Angel Moreno Pelayo, has carried out the genetic analysis using Mosaic Finder, a tool based on Next-Generation Sequencing (NGS) technology and analysis software developed by his team for the detection and quantification of very rare alleles.

There are over six thousand diseases whose origin is to be found in the mutations or alterations of our genes, so all the members of this consortium formed by nanoGUNE and the 12 de Octubre and Ramón y Cajal Hospitals agree that treating these types of diseases by means of gene editing tools is the future in terms of treating and curing them.