Hyperbolic materials are very special because they behave like a metal in one direction, but like an insulator in the other. Until now, these materials have been used to fabricate complex nanostructures that permit subwavelength-scale imaging, as well as the focusing and controlling of light at the nanoscale. However, in order to fully exploit their potential, it is necessary to study and understand how light behaves inside them. 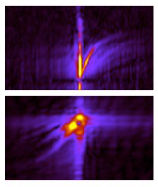 The work lays the foundations for studying the precise manner in which light travels through complex optical systems at the subwavelength scale in extremely high levels of detail. Such a capability will be vital for verifying that future nanophotonic devices, perhaps with biosensing or optical computing applications, are functioning as expected.

"The difficulty in performing the reported experiments is the extremely short wavelength of light when it is inside a hyperbolic material” explains Ikerbasque Professor Rainer Hillenbrand, leader of the nanooptics group at nanoGUNE. When light moves inside the material – in our case mid-infrared light in a 135 nm boron nitride slab - it travels in the form of what we call a polariton, where the light is actually coupled to the vibrations of the matter itself".

These polaritons can be considered a double-edged sword to the scientists trying to study them. On the one hand, they squeeze light into much smaller volumes than is normally possible. This is helpful for a wide range of applications that require the manipulation of light in tiny spaces, such as detecting and identifying individual molecules. On the other hand, this ultra-high confinement means that special techniques have to be developed to look at their behavior.

Edward Yoxall, who performed the experiments at nanoGUNE along with Martin Schnell, elaborates: "Because the wavelength of a polariton is so small, we cannot use 'conventional' optical equipment, such as lenses and cameras, to image it. Instead, we have to use a special type of microscope." This microscope - a scattering-type scanning near-field infrared microscope - is capable of seeing details 1000 times smaller than a standard infrared microscope, visualizing "objects" of just 10 nanometers. 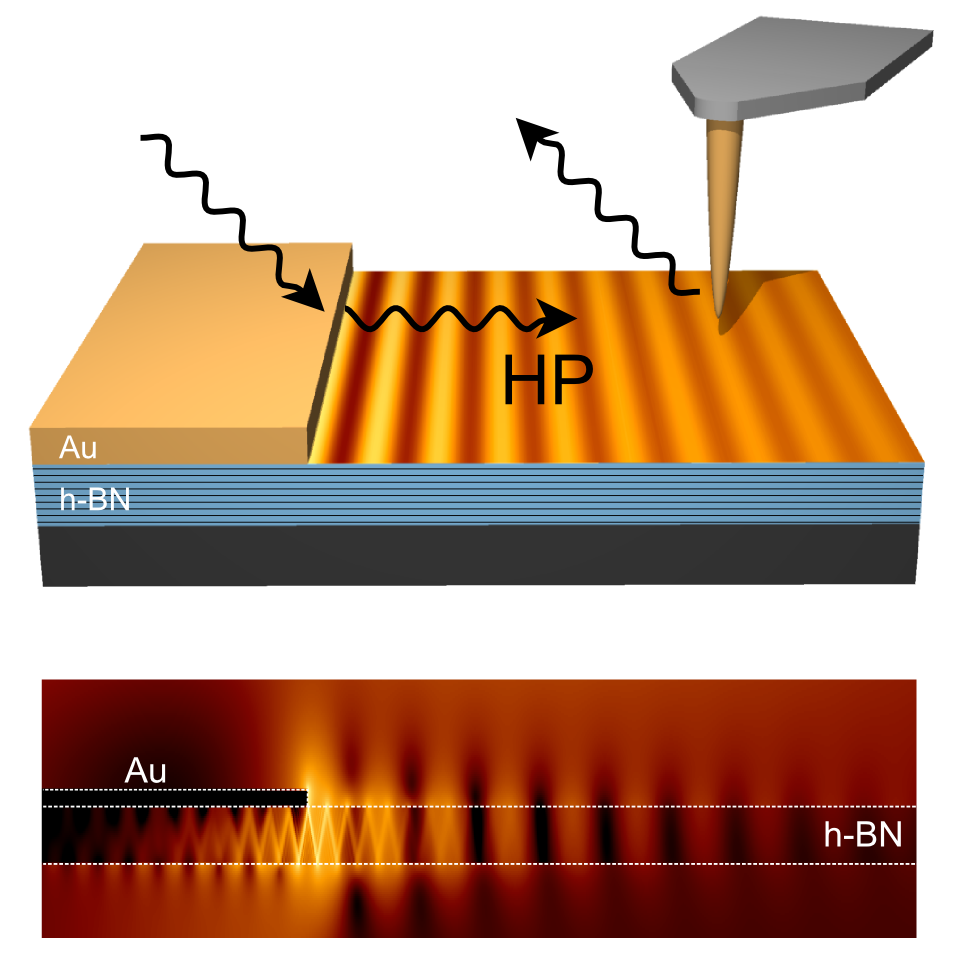 Illustration (top) and simulation (down) of nanoimaging slow nanolight in a thin boron nitride slab. Incident light pulses are converted by a gold (Au) film into slow hyperbolic polariton (HP) pulses propagating in the boron nitride (h-BN) slab. The HPs are traced in space and time by first scattering them with a nanoscale sharp scanning tip and then measuring the time delay between scattered and the incident pulse as a function of tip position.

"But it's not just the spatial resolution that makes tracking polaritons tricky", continues Yoxall. "If we want to see how a polariton moves, we need to detect and track it in both space and time. This can be accomplished by using extremely short flashes of light - or pulses- that are just 100 femtoseconds long." That is an extremely small number; less than one millionth of a millionth of a second. By using these very short flashes in combination with their near-field microscope, the researchers are able to watch the polaritons passing different locations along the boron nitride slab, allowing for measuring their speed.

By using both the space and time information that is gathered during the experiment, the scientists have been able to exactly determine how the polariton was travelling. The time- and space-resolved maps revealed a range of intriguing behaviors of the polaritons, including a dramatic slowing down of the pulse velocity - below 1 percent of the light velocity in vacuum- and a reversal of the direction in which the polariton waves were propagating in relation to the direction of the energy flow.

“An exciting result is the speed at which the polariton moves”, says Yoxall. “There’s a lot of interest in slow light, and what we’ve shown here is a novel way of achieving this.” Slow light in conventional photonic structures has great potential for manifold applications in sensing and communication technologies, owing to enhance light-matter interactions. The deep subwavelength-scale confinement of slow polaritons in hyperbolic materials could help to miniaturize these devices.

How to manipulate light on the nanoscale over wide frequency ranges

But now, an international team has proposed a novel method that allows to widely extend this range of working frequencies of phonon polaritons in van der Waals materials. This consists in the intercalation of alkaline and alkaline earth atoms, such as sodium, calcium or lithium, in the laminar structure of the van der Waals vanadium pentaoxide material, thus allowing to modify its atomic bonds and consequently its optical properties.

Considering that a large variety of ions and ion contents can be intercalated in layered materials, on-demand spectral response of phonon polaritons in van der Waals materials can be expected, eventually covering the whole mid-infrared range, something critical for the emerging field of phonon polariton photonics.

The finding, published in the journal Nature Materials, will allow progress in the development of compact photonic technologies, such as high-sensitivity biological sensors or information and communication technologies at the nanoscale.

Few years ago a collaboration between the nanomagnetism and nanooptics groups in nanoGUNE demonstrated that ferromagnetic nanoantennas support localized plasmons, and, at the same time, show a sizeable magneto-optical activity under the application of external magnetic fields. The idea of bringing light and magnetism together at the nanoscale using plasmons led, in the past decade, to the rapidly developing field of magnetoplasmonics to realize novel and unexpected phenomena and functionalities for the manipulation of light and/or spin states at the nanoscale. 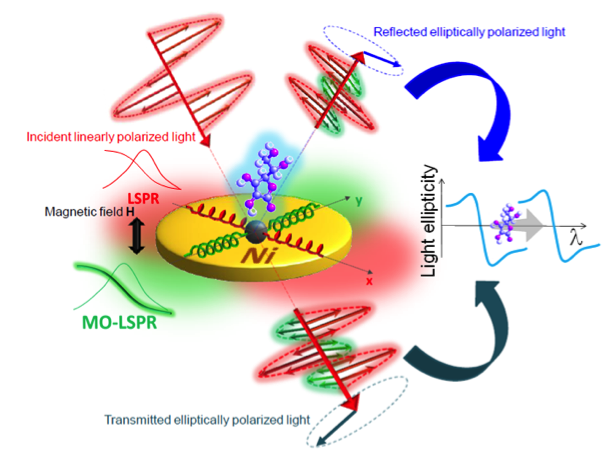 Now, a team of researchers from CIC nanoGUNE, in collaboration with researchers from Chalmers University of Technology and Gothenburg University, have discovered a new way of optical sensing, using the magneto-optical Kerr and Faraday effects in ferromagnetic nanoantennas. They have recently shown in a work published in Nature Communications how designed phase compensation in the electromagnetic response of magnetoplasmonic nanostructures enables them to act as ultrasensitive label-free molecular-level sensors with high figures of merit, viz. great sensing performances with extraordinary signal to noise ratio. Most remarkably, they have shown a raw surface sensitivity (that is, without applying any fitting procedures) of two orders of magnitude higher than the current values reported for nanoplasmonic sensors. Such sensitivity corresponds to a mass of 0.8 ag per nanoantenna of polyamide-6.6, which is representative for a large variety of polymers, peptides, and proteins. This proof of concept opens the pathway for the designing of a new type of practical devices, which can be magnetically activated and controlled to achieve very high sensing performances up to a sub-molecular-level.

The discovery of these ultrasensitive capabilities is primarily directed towards biomedicine and diagnostics as an efficient way to retrieve more information from smaller amount of fluids, like blood or urine as well as to detect cancer serum or to study proteins dynamics upon surface functionalization. In addition to biosensing, there are also many other potential applications that do not require surface functionalization and would enormously benefit from this novel approach, like chemical sensing of toxic materials and explosives, or ultra-precise thickness-monitoring applications.

The experiments were carried out in nanoGUNE and are the results of a synergistic collaboration between the Nanomagnetism and Nanomaterials groups.

Light polarization manipulation enabled by phase compensation in the electric response of a magneto-plasmonic nanoantenna controlled through precise design of the LPRS resonance induced by the magneto-optical activity (MO-LSPR) of the ferromagnetic constituent material (Ni) and  exploitation of the  effect for ultrasensitive molecular sensing.