The Ludwig-Genzel-Prize 2014 is awarded to Rainer Hillenbrand

Rainer Hillenbrand received the award from the hands of Prof. Dressel, chairman of the selection committee, during the LEES 2014 conference in Loire Valley (France) for his pioneering and world-leading developments in the field of optical near-field microscopy. Hillenbrand studied at the University of Augsburg and developed his PhD research at the Max-Planck Institute of Biochemistry in Martinsried, both in Germany. During his PhD, Hillenbrand and his colleagues developed a novel scanning near-field optical microscope for background-free amplitude and phase resolved optical imaging with nanoscale spatial resolution, which they named scattering-type scanning near-field microscopy (s-SNOM). This development was a breakthrough in the field and inspired many groups worlwide to start working in this direction. He continued working at the same German institute and built up his own independent junior research group. Further developments made possible to found the start-up company Neaspec in 2007, which has been the first company offering commercial s-SNOM systems. 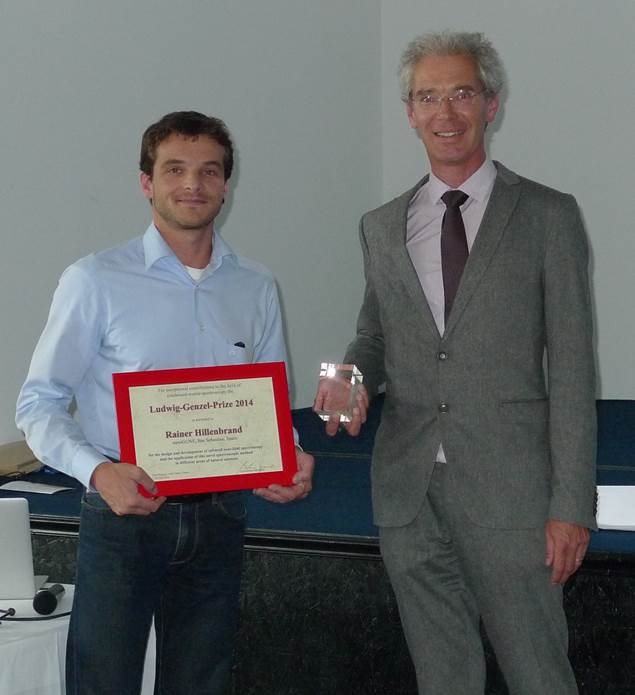 In 2008, Hillenbrand joined nanoGUNE as the group leader of the Nanooptics group and Ikerbasque Research Professor. He has applied his technique to perform cutting-edge research in different fields, including fundamental solid-state physics, materials science, life science, and nanophotonics. Recent developments include nanoscale infrared Fourier transform spectroscopy (nano-FTIR), which enables infrared spectroscopy with a more than 100 times improved spatial resolution compared to conventional infrared spectroscopy systems. Hillenbrand currently applies the techniques for chemical identification of nanomaterials, protein studies and the development of graphene-based nanophotonics.

According to the price committee, the revolutionary surface-imaging technique allows to perform spectrally resolved measurements from the visible to the microwave regime with an unprecedented spatial resolution. Hillenbrand work “reveals a unique combination of engineering skills and deep insights into the scientific problems of the various topics, addressing both fundamental questions and applications reaching all the way to industrial maturity”.

The Ludwig-Genzel-Prize is awarded to a young scientist for exceptional contributions to the field of condensed-matter spectroscopy. Related to Ludwig Genzel’s scientific oeuvre the focus is on the far-infrared spectral range. The award contains a diploma and prize money of 4000 €. Bruker Optics (Ettlingen) is the sponsor of this prize. The prize is awarded every two years during the International Conference on Low Energy Electrodynamics in Solids (LEES). The selection is made by a committee. The current members of the selection committee are: Martin Dressel —chairman— (Univ. Stuttgart, Germany), Leonardo Degiorgi (EHT Zürich, Switzerland), Jan Petzelt (Academy of Sciences, Praha, Czech Republic), Karl Renk (Univ. Regensburg, Germany) and Hartmut Roskos (Univ. Frankfurt, Germany).