Researchers from the nanoscience research center CIC nanoGUNE, the Freie Universität Berlin and Neaspec company employ nano-FTIR spectroscopy for label-free chemical and structural imaging of proteins with nanoscale spatial resolution and with sensitivity to single protein complexes of less than one attogram (10-18 gram). The work has been published recently in Nature Communications. (I. Amenabar et al., Nature Communications, 2013, DOI:10.1038/ncomms3890)

Proteins are basic building blocks of life. The chemistry and structure of proteins are essential for their biological function. Indeed, the structure of proteins determines their mechanical and catalytic properties (e.g. enzymes). Such functions literally shape all living beings. Furthermore, the protein structure also plays a major role in many diseases. For example, the secondary structure of a protein (whether it has helical (alpha-) or sheet-like (beta-) internal substructures) is highly relevant in the pathogenous mechanism leading to Alzheimer, Parkinson, and other neuro-degenerative diseases. Although a variety of methods have been developed to study the protein chemistry and structure, recognizing and mapping the secondary structure on the nanometer scale, or even with single protein sensitivity, is still a major challenge. A new infrared spectroscopy technique, called nano-FTIR, has now enabled nanoscale chemical imaging and probing of protein’s secondary structure with enormous sensitivity.

nano-FTIR is an optical technique that combines scattering-type scanning near-field optical microscopy (s-SNOM) and Fourier transform infrared (FTIR) spectroscopy. The latter is a tool often used for studying secondary structure of proteins that, however, does not allow for nanoscale mapping of proteins by itself. In nano-FTIR, a sharp metalized tip is illuminated with a broadband infrared laser beam, and the backscattered light is analyzed with a specially designed Fourier transform spectrometer. With this technique, the researchers could now demonstrate local infrared spectroscopy of proteins with a spatial resolution of less than 30 nm.

“The tip acts as an antenna for infrared light and concentrates it at the very tip apex. The nanofocus at the tip apex can be thus considered as an ultra-small infrared light source. It is so small that it only illuminates an area of about 30×30 nm, which is the scale of large protein complexes”, says project leader Rainer Hillenbrand.

In order to demonstrate the versatility of nano-FTIR for nanoscale-resolved protein spectroscopy, the researchers measured infrared spectra of single viruses, ferritin complexes, purple membranes and insulin fibrils. “They all exhibit variations of their secondary structure – describes Iban Amenabar, who performed the nanospectroscopy experiments-; viruses and ferritin are mainly made of alpha-helical structures, while insulin fibrils are mainly made of beta-sheet structures”. Simon Poly, the biologist in the team, explains that “in a mixture of insulin fibrils and few viruses, standard FTIR spectroscopy did not reveal the presence of the alpha-helical viruses. By probing the protein nanostructures one by one with nano-FTIR we could clearly identify the virus, that is the alpha-helical structures within the beta-sheet ones”.

An important aspect of enormous practical relevance is that the nano-FTIR spectra of proteins match extremely well with conventional FTIR spectra, while the spatial resolution is increased by more than 100. “We could measure infrared spectra of even single ferritin particles. These are protein complexes of only 24 proteins. The mass of one ferritin complex is extremely small, only 1 attogram, but we could clearly recognize its alpha-helical structure”, says Amenabar.

The researchers also studied single insulin fibrils, which are a model system for neurodegenerative diseases. It is known that insulin fibrils have a core of beta-sheet structure but their complete structure is still not fully clarified. “In nano-FTIR spectra of individual fibrils we recognized not only beta-sheet structure, but also alpha-helical structures, which might be of relevance for fibril association,” says Alexander Bittner, leader of the Self-Assembly Group at nanoGUNE.

“We are excited about the novel possibilities that nano-FTIR offers. With sharper tips and improved antenna function, we also hope to obtain infrared spectra of single proteins in the future. We see manifold applications, such as studies of conformational changes in amyloid structures on the molecular level, the mapping of nanoscale protein modifications in biomedical tissue or the label-free mapping of membrane proteins. This could lead to a new era in infrared nano-bio-spectroscopy”, concludes Rainer Hillenbrand, head of the Nanooptics Group at nanoGUNE. 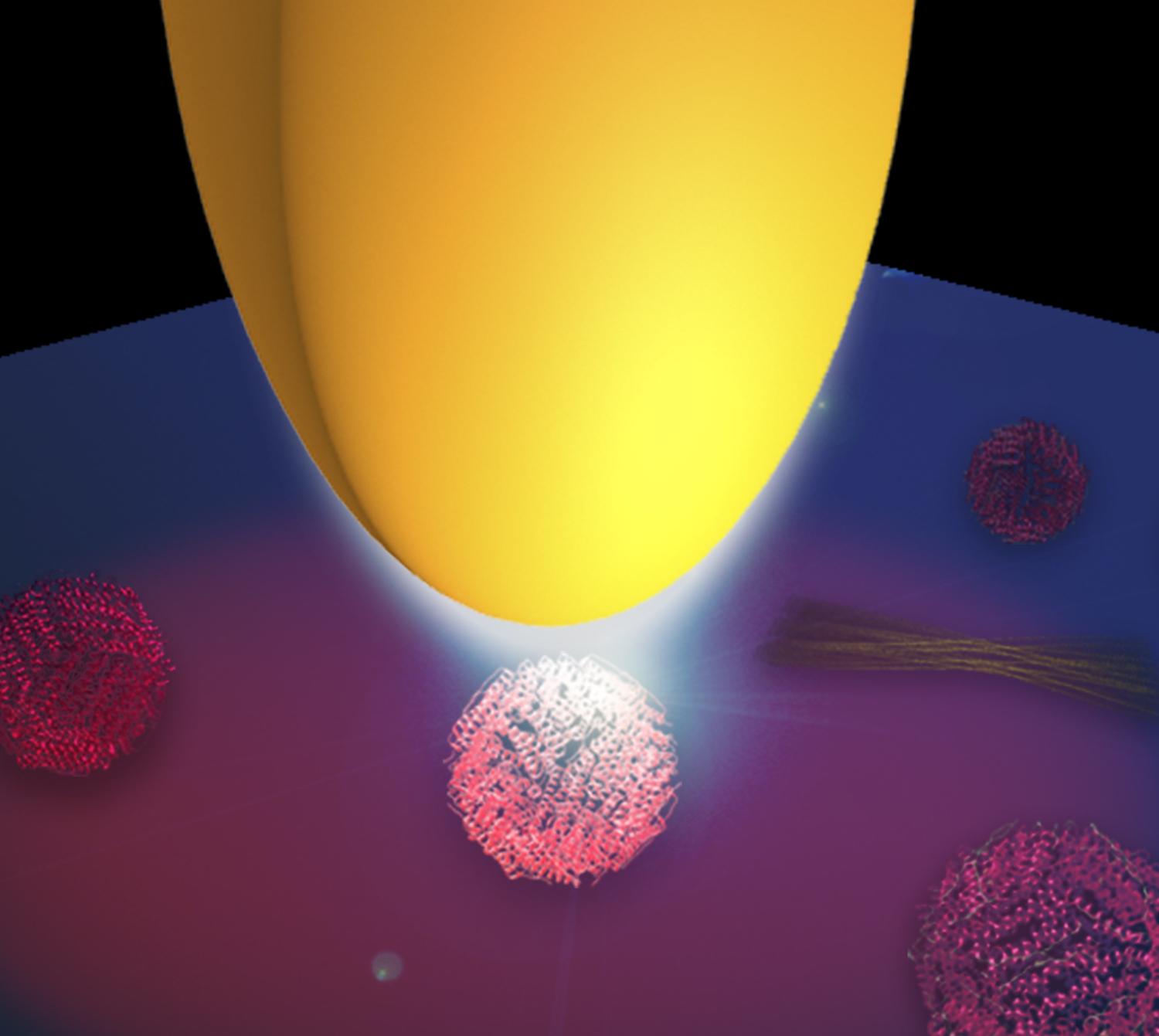 Figure: Illustration of infrared protein nano-spectroscopy. A metal tip (yellow) is illuminated with infrared light. Due the antenna function of the tip, the light is concentrated at the tip apex and creates a nanofocus, which illuminates the proteins. Copyright: CIC nanoGUNE