On Friday 27 September, nanoGUNE’s pre-doctoral researcher Olatz Idigoras received her doctoral Degree at the University of the Basque Country (UPV/EHU) with a thesis entitled “Magnetization reversal behavior of ferromagnetic thin films and nano-structures”

In general terms, the presented thesis studies the magnetization reversal behaviour of ferromagnetic thin films and nano-structures. In one core part of the thesis, the influence of crystallographic alignment, materials composition and thickness onto the magnetic properties of Co and Co alloy thin films has been studied. Hereby, epitaxially grown 30 nm thick (1010) Co thin films, which have in-plane uniaxial magnetic anisotropy, has been utilized as a reference structures. In order to modify the crystallographic alignment in a continuous and controlled fashion, a method to interrupt the epitaxy has been developed and applied. Hereby, it was observed that while in samples with good crystallographic alignment the magnetization reversal is dominated by uniform magnetization states, non-uniform intermediate stable or meta-stable states emerge in the case of sufficiently disordered samples. Furthermore, in samples with partial crystallographic alignment, an anomaly has been found, in which conventional hard axis behaviour disappears in a very narrow range of applied field directions. In such samples, a frustrated magnetic state occurs when the magnetic field is applied along the nominal hard axis, which arises from the competition between ferromagnetic exchange and locally misaligned uniaxial anisotropies of adjacent grains. For the study of magnetic alloys, CoRu films of different compositions have also been grown epitaxially with (1010) crystallographic orientation. Here, it has been found that the magneto-crystalline anisotropy constant shows a complex and non-monotonous behaviour as a function of Ru content in the alloy, while saturation magnetization and Curie temperature show a more expected monotonic decrease with Ru concentration. 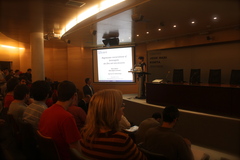 In addition to the materials oriented studies, Co-films have also been utilized to experimentally investigate the dynamic phase transition and specifically, the influence of a constant bias field onto the phase diagram and phase stability. These experimental studies have been furthermore complemented by theoretical calculations based upon the Kinetic Ising model in mean field approximation.

Finally, the benefits that the magneto-optical Kerr effect microscope offers for the study of individual nano structures has been demonstrated and analysed. Specifically, single cycle hysteresis loop measurements of 30 nm wide Co wires, fabricated by means of focused electron beam induced deposition, have been demonstrated. Also, 100 nm wide wires of only 0.8 nm thick Co layers (as part of a Pt/Co/Pt-trilayer structure) have been measured with the Kerr microscope with excellent signal to noise ratio, allowing for the distinction of uniform vs. non-uniform reversal. These specific Pt/Co/Pt nanostructures have been successfully fabricated, maintaining their original perpendicular anisotropy, by means of focused ion beam induced layer intermixing. For this purpose, a special TiN hard mask had to be developed, which acts as a sacrificial layer, and opens up a promising pathway for directly nano-structuring multilayer materials by means of focused ion beam exposure.