Materials for second-generation information and communication technology applications should be as small and as fast as possible. It is precisely these kind of materials that Ikerbasque Prof. Luis Hueso, head of the Nanodevices Group at nanoGUNE is seeking for, together with his colleagues Mirko Cinchetti  (TU Dortmund) and Alek Dediu (Istituto per lo Studio dei Materiali Nanostrutturati in Bologna). In a progress article published in Nature Materials, the three experts in molecular spintronics give an overview of the developments in this relatively new research field. 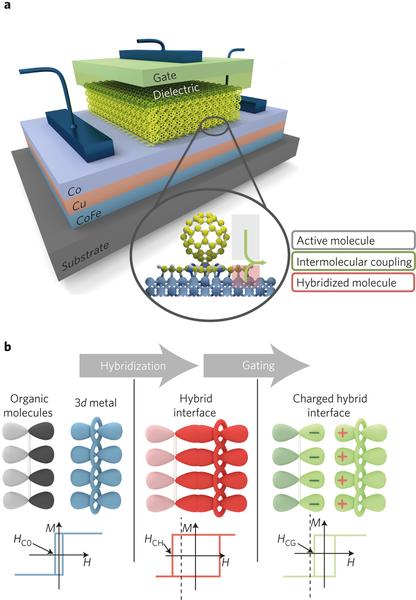 The physicists focus on the extremely intriguing magnetic properties of interfaces that are formed when organic molecules are put in contact with inorganic metal surfaces. They argue that one of the main challenges in the discipline is to control these magnetic properties using, for example, voltages or light, and suggest a second-generation spintronics device based precisely on such actively controlled interfaces.

Spintronics has only been working with molecules since 2004, which means that there still remains a lot to do for the researchers working in this field. The molecules offer plenty of possibilities for applications: for example, they can induce ferromagnetism in copper. If scientists are able to use the extreme flexibility of molecules to control such emergent phenomena, molecular interfaces may play a crucial role in the development of a new generation of spin-based technologies.