The Emakumeak Zientzian 2022 initiative, organized by seventeen Basque organizations to mark February 11, International Day of Women and Girls in Science, got off to a strong start. The launch held this morning in Donostia-San Sebastian was attended by Jabier Larrañaga, Head of Economic Promotion, Tourism and Rural Environment of the Charter Provincial Council of Gipuzkoa, Marisol Garmendia, Head of Economic Development and Employment of Donostia-San Sebastian City Council, Aitziber L. Cortajarena, Scientific Director of CIC biomaGUNE, Ainhoa Lete, Co-founder and CEO of BuntPlanet, and Sandra Camarero, Ikerbasque researcher at POLYMAT, as well as the coordinators of the Emakumeak Zientzian 2022 initiative Mónica Moreno (POLYMAT) and Itziar Otegui (CIC nanoGUNE). 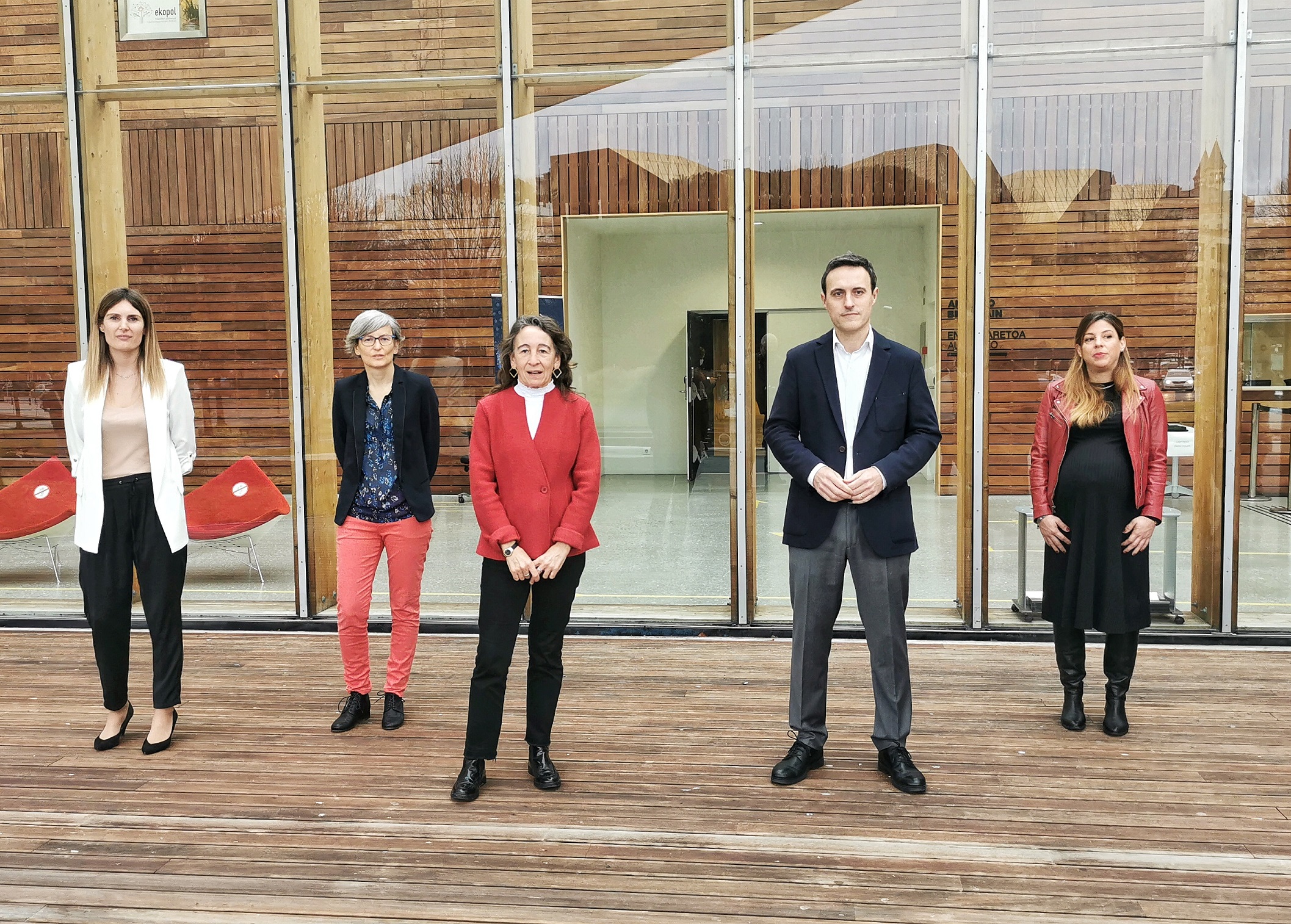 After a brief introduction by the coordinators of the Emakumeak Zientzian initiative, Marisol Garmendia, vicepresident of Fomento San Sebastian, stressed that it is essential to make the work of women in science visible. "In our city our reality is one that we can be proud of: 47% of the researchers residing here are female, as well as 37% of the foreign talent we host at Talent House. We at Fomento San Sebastián are working to give these figures the visibility they deserve. Agreements with initiatives such as Emakumeak Zientzian, grants for entrepreneurship, internationalization grants, project acceleration programs, support for inclusion... are some of the lines of work that we implement from this municipal company with special emphasis on women."

Then it was time to listen to professionals who work in various fields of science and technology and who, on a daily basis, experience the gender gap problem first hand. Aitziber L. Cortajarena, Scientific Director of CIC biomaGUNE, focused her speech on the reasons behind the Emakumeak Zientzian initiative by stressing the low representation and visibility of women in academia, especially in terms of scientific career development. "One only has to look at these graphs from the latest report on science in the Basque Country produced by Ikerbasque. During the last decade, the number of new female PhD students has been slightly higher than that of new male PhD students at Basque universities. However, there are fewer women the higher up the ladder of academic and professional recognition one goes," said Aitziber L. Cortajarena.

Ainhoa Lete, Co-Founder and CEO of BuntPlanet, admitted that at the beginning of her professional career she did not encounter any difficulties or discrimination because of the fact that she was a woman. However, "with the passing years and especially when facing greater challenges, I find that I am leading a company in a mostly male-dominated sector. For me it is a challenge that I take on with a certain responsibility in the sense of being part of the change that I would like to see happen: to see women founders at the top of the lists of the world's leading technology companies", said Ainhoa Lete. In her speech, she was keen to cite the example of the scientist and businesswoman Özlem Türeci, co-founder of the German biotechnology company BioNtech, and architect of the Pfizer vaccine for which she received the 2021 Princess of Asturias Award for Technical and Scientific Research.

Sandra Camarero, Ikerbasque researcher at POLYMAT and the UPV/EHU-University of the Basque Country, also agreed that in her early days as a researcher she did not find it difficult to access junior research posts. However, "I have since realized that it is much easier to combine a fulfilling professional career with a fulfilling personal life if you are a man," she stressed. She highlighted the importance of the specific calls for proposals to incorporate women into leadership positions in research, "such as the Emakiker grant that has allowed me to consolidate my own research group". She also stressed that there is still work to be done in relation to competitive calls to obtain funding for research projects: "Many of them did not even take possible maternity or paternity leave into account until practically yesterday, and although this change is happening, the problem should be addressed in a more comprehensive way and the actual professional context of researchers should be taken into consideration," added Sandra Camarero.

Finally, Jabier Larrañaga, Head of Economic Promotion, Tourism and Rural Environment of the Charter Provincial Council of Gipuzkoa, recalled that "the percentage of women across the province working full time in the field of R&D is 33.97%, and 28.11% in the activity that brings together the most research: engineering. If we analyze the positions of greater responsibility, the imbalance is even bigger. If we want Gipuzkoa to be one of the provinces in the world with the least inequality in all areas, this is something we cannot allow because it is a question of justice, and because it entails renouncing the potential talent of 50% of society". So he highlighted the fact that the Provincial Council is working "to promote scientific and technical branches among young women, to break gender stereotypes, to encourage co-responsible conciliation, and to support the careers of women researchers in their calls for R&D funding".

The event also saw the presentation of the Emakumeak Zientzian 2022 awareness-building campaign, which includes testimonies by the researchers of the organizations running this initiative and which will be launched today on social networks. According to the coordinators of the Emakumeak Zientzian initiative, "what we want to achieve through this awareness-building campaign is to get the work of all these women professionals highlighted and for their model to provide a reference for the coming generations, so that more and more women can gain access to scientific and technical careers, which are the careers that companies in emerging sectors are already demanding, and so that we can progress along the road to equal career development".

A wide-ranging program has been organized with a variety of activities designed to bring the message "science is girls’ stuff" to as many people as possible and to stress the importance of achieving equal access and career development in the field of science and technology. The full program of activities is available at www.emakumeakzientzian.eus.

Emakumeak Zientzian 2022 has the substantial support of the Charter Provincial Council of Gipuzkoa and Fomento San Sebastián, as well as the collaboration of the following bodies and organizations: the Spanish National Research Council (CSIC), the Spanish Foundation for Science and Technology (FECYT), the Spanish Research Agency through the Severo Ochoa and María de Maeztu centers associated with the initiative, the Basque Film Library and the Donostia-San Sebastian International Film Festival, and Aspegi (Association of Professional, Business and Managerial Women of Gipuzkoa).