This morning the Emakumeak Zientzian project, which has been growing year on year, was presented by seventeen Basque organizations. They confirmed their commitment to the objectives of the initiative: to make the activity of women in science visible, to break with the typically male roles attributed to scientific and technical activities, and to encourage girls and teenagers to choose scientific careers. With these objectives in mind, the organizations are coming together to run a joint program of activities to mark International Day of Women and Girls in Science, which is celebrated every year on February 11. 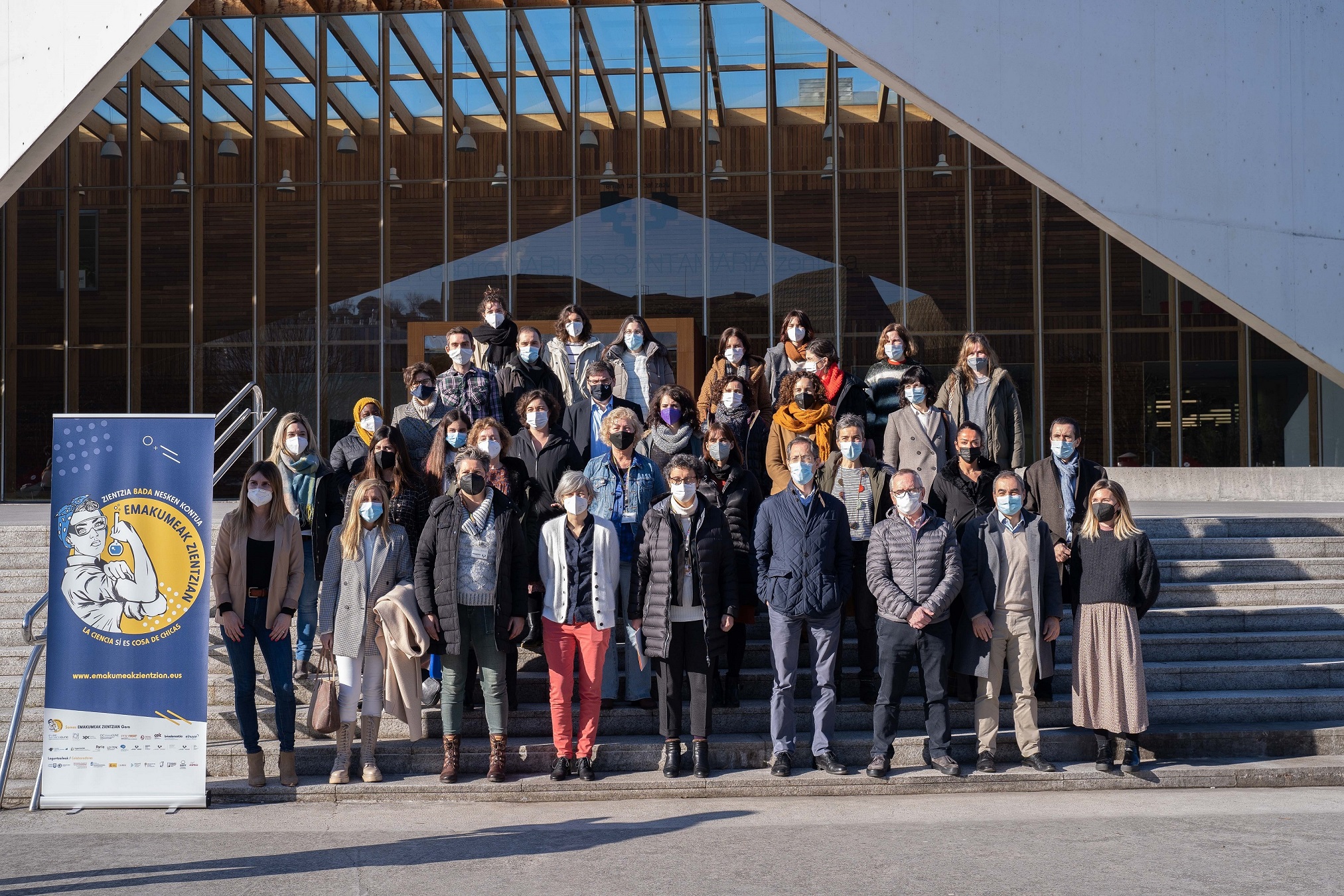 From that day onwards and in Donostia, the Emakumeak Zientzian 2022 program will be focusing on the week from 11 to 18 February. A wide-ranging program has been organized with a variety of activities designed to bring the message "science is girls’ stuff" to as many people as possible and to emphasize the importance of achieving equal access and professional development in the scientific and technological field.

The organization has announced that all age groups will have the chance to participate in the initiative. Families can get to enjoy the following experimental workshops: Estrellas de la Ciencia (Science Stars) at the Eureka! Zientzia Museoa, the game El Tesoro de la Ciencia (Science Treasure) based on the well-known Treasure Hunt, or the amusing stage play Piztu! Emakumeon energía Piztu! Emakumeon energia (Switch on! The energy of us women). There will be engineering and nanoscience workshops for teenagers, round tables and visits to research centers for schools, plus a session on academic orientation for teachers, all with the aim of presenting real models that will serve as a reference for future generations. To highlight the role of adult women as transmitters of culture, an activity has been organized for women over 55: El poder de la experiencia (The Power of Experience), in which we will be doing a series of short experiments that are easy to perform anywhere and designed to enable science culture to flow in families and in our milieus. Likewise, a special session has been programmed for the general public as part of the Cinema and Science series, in which the film Gorillas in the Mist will be screened in Donostia, Vitoria-Gasteiz, Bilbao and Iruñea-Pamplona.  The Victoria Eugenia Club Aretoa will host the event Women Scientists of Yesterday and Today, in which six women scientists who work in different centers in Gipuzkoa will take the stage to talk about the research projects they are working on and pay tribute to some of the great women scientists in history through the story of their fascinating lives and scientific contributions.

Two exhibitions can also be visited, one at the Eureka! Zientzia Museoa and the other in the main building of the Science and Technology Park of Gipuzkoa. In addition, a new initiative will be piloted in Donostia; it has been launched in collaboration with some stores in the city center to pay tribute in their store windows to women scientists who stand out as a result of their prominent careers. This initiative has been possible thanks to the combined work of Elhuyar, Fomento de San Sebastián and the Barrio San Martín Association.

The full program of activities is available from today onwards via the website www.emakumeakzientzian.eus. There will be face-to-face, virtual and hybrid face-to-face and online activities.

The 17 organizations involved in the 6th edition of Emakumeak Zientzian are a significant representative sample of the Basque Country’s science and technology base. This bringing together is the result of an Emakumeak zientzian ‘open-door’ initiative, which is aspiring to be a unifying force, and is convinced that we are better off as a result of adding. So in this 2022 edition, the organizing bodies of the Emakumeak Zientzian project are POLYMAT, CIC nanoGUNE, Donostia International Physics Center (DIPC), the Center for Materials Physics (CFM CSIC-UPV/EHU), CIC biomaGUNE, Biodonostia, Tecnun-School of Engineering, Ceit, Eureka! Zientzia Museoa, the Official Association of Industrial Engineers of Gipuzkoa, Basque Center on Cognition, Brain and Language (BCBL), Lortek, the Faculty of Informatics, the Faculty of Engineering –Gipuzkoa, and the Faculty of Chemistry of the UPV/EHU, Elhuyar, and the Gipuzkoa Science and Technology Park.

Emakumeak Zientzian 2022 has the substantial support of the Provincial Council of Gipuzkoa and Fomento San Sebastián, as well as the collaboration of the following bodies and organizations: the Spanish National Research Council (CSIC), the Spanish Foundation for Science and Technology (FECYT), the Spanish Research Agency through the Severo Ochoa and María de Maeztu centers associated with the initiative, the Basque Film Library and the San Sebastian International Film Festival, and Aspegi (Association of Professional, Business and Managerial Women of Gipuzkoa).

All face-to-face activities will take place in line with the required health measures, and in some of them it will be necessary to show the COVID vaccination certificate.