Nanotechnology highlights nanoGUNE’s Self-Assembly Group’s research as the “Publisher’s Pick”. A feature about the original paper has been published at the “Lab talk” section and an interview to José María Alonso has been included. 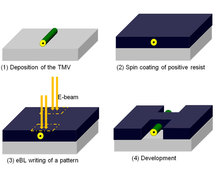 As it is mentioned in its webpage, “researchers at the CIC nanoGUNE Consolider (Donostia-San Sebastián, Spain) and CEMES-CNRS (Toulouse, France) have shown that tobacco mosaic virus (TMV) is compatible with electron beam lithography (eBL) – an important and versatile method for patterning samples on the nanoscale.

Tobacco mosaic virus (TMV) is a textbook example of a virus, and also of a self-assembling nanoscale structure. This tubular RNA/protein architecture has found applications as a biotemplate for the synthesis of nanomaterials such as wires, tubes and nanoparticle assemblies.

In their latest study, the scientists have presented adjusted eBL-compatible processes that allow the incorporation of TMV in nanostructures made of positive and negative tone eBL resists. The key steps involve covering TMV with polymer resists, avoiding temperatures above 50 °C, and development (selective dissolution) in carefully selected organic solvents.

To demonstrate the post-lithography biochemical functionality of TMV, the scientists performed selective immunocoating of the viral particles with primary and with secondary gold-labelled antibodies, and used immobilized TMV as a direct immunosensor.”

My name is José María Alonso. I was a postdoctoral researcher of the Self-Assembly Group, led by Alexander Bittner, at the nanotechnology research center CIC nanoGUNE Consolider (Donostia-San Sebastián, Spain). Currently I am a researcher at the Laboratory of Organic Chemistry of the Wageningen University (Wageningen, The Netherlands).

What prompted you to pursue this field of research?

The main research areas of the Self-Assembly Group are the use of Tobacco mosaic virus (TMV) as a biotemplate for nanofabrication processes and the incorporation of this plant virus into nanostructures. TMV is the textbook example for self-assembly. The particle length is 300 nm and its coat proteins assemble to well-defined 18 nm thick tubes with 4 nm wide channels. Perhaps the biggest advantage of plant viruses in nanotechnology is that we know exactly which chemical groups are located in which position. We can use the channel and outer surface for modifications with the aim of making new nanoscale devices, such as conductive wires, magnetic tubes, and small containers for liquids.

What is this latest paper all about?

In this paper we show that TMV particles are compatible with electron beam lithography (eBL) processes and can be integrated into nanostructures made of positive and also negative eBL tone resists. This means the structure can contain very few protruding areas (blocks or cuboids of polymer), or very few recesses (channel systems or windows in a polymer layer). We built the structures on top of TMV randomly adsorbed on a silicon wafer. We used a lithography scheme that relies on extremely low processing temperatures of 50 °C, and on development of tone resists with organic solvents that we chose for their biocompatibility. Viral particles maintain their biochemical functionality after fabrication steps, which we verified through selective immunocoating of the TMV.

Our work demonstrates the use of TMV in integrated nanostructures of the sizes typically used in nanofluidics or electronics. The adsorbed TMVhas the width of typical transistors, and our eBL structures are comparable to standard interconnect widths. One can now advance further, e.g. to smaller features, or away from polymer structures.

Technically, we merely replaced the usual resilient inorganic nanoobjects (metal wires, carbon fibres, etc.) by TMV, and optimized the conditions. However, we believe that we established a conceptual advance in the integration of nanobiostructures in nanofabrication techniques. We suggest our fabrication methods are also applicable for other types of sensitive materials that are incompatible with standard eBL processing, e.g.DNA, RNA, protein fibres or tubes, or soft polymers.

What do you plan to do next?

The Self-Assembly Group is currently studying the wetting behaviour of TMV in the nanoscale. Environmental scanning electron microscopy is used to conduct nanofluidic experiments by condensing water nanodroplets on immobilized TMV particles. Together with our nanofabrication, we would be able to direct liquids to single nanoobjects (e.g. TMV).