Nature Materials: Self-assembly of a graphene nanoribbon within a carbon nanotube

A new strategy for spontaneous self-assembly of Graphene NanoRibbons (GNRs) using a Single-Walled carbon nanotube (SWNT) as both the reaction vessel and the template for nanoribbon growth has been reported in a recent article by researchers from nanoGUNE and from the Universities of Nottingham and Ulm (A. Chuvilin et al., Nature Materials 10, 687–692 (2011)).

Although the unique ability of nanotubes to act not only as containers, but also as efficient templates for the synthesis of structures was already known, the growth of GNRs had never been observed in nanotubes. The assembly of carbon atoms inside a SWNT had been shown to create a system containing a guest polymer or SWNT inside the host SWNT (Polymer@SWNT or SWNT@SWNT). This preferences were related to the energy over-cost related with the unsaturated valences of the carbon atoms at the edge of the nanoribbon. However, theoretical studies had shown that, in the presence of heteroatoms that could saturate those valences, the resultant edge-terminated GNR became more stable than the other structures.

In the experiment reported in the article, a complex molecule containing a selection of heteroelements (H, O, N, and S) is linked to C80 fullerenes that are introduced inside a SWNT. The fragmentation of both the fullerenes and the linked molecules can be triggered using the electron beam of a TEM or simply by heating the sample. The subsequent self-assembly of the atoms inside the nanotube produces a GNR with sulphur atoms saturating the edge valences (S-GNR). 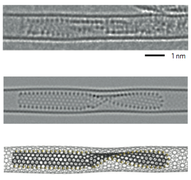 The observed S-GNRs are 7 – 28 nm in length, but there is not fundamental reason why they cannot be formed throughout the entire length of the host-nanotube, resulting in nanoribbons up to several micrometres long. Furthermore, the S-GNRs show a helical twist that could give rise to interesting piezoelectric effects at the nanoscale, as compression of the nanotube would result in changes in the electric properties of the S-GNR and viceversa. This, together with the fact that the S-GNRs are expected to show semiconducting properties, may pave the way for future applications of these materials in electronic and mechanical nanodevices.