In a recent article (Nature, DOI: 10.1038/nature11254) researchers from the nanooptics group at nanoGUNE, in collaboration with researchers from ICFO and IQFR-CSIC, report the launch and detection of propagating optical plasmons in tapered graphene nanostructures using near-field scattering microscopy with infrared excitation light. While optical graphene plasmon resonances had recently been investigated spectroscopically, no experiments so far had directly resolved propagating plasmons in real space. These results pave the way towards graphene-based optical transistors and a plethora of novel nano-optoelectronic devices and functionalities.

The article reports first ever visualizations of light guided with nanometric precision on graphene (a one-atom-thick sheet of carbon atoms). This visualization proves what theoretical physicists have long predicted; that it is possible to trap and manipulate light in a highly efficient way, using graphene as a novel platform for optical information processing and sensing. Synergies between theoretical proposals from IQFR-CSIC, specializations in graphene nano-photonics and nano-optoelectonics at ICFO, and the experimental expertise in optical nano-imaging at nanoGUNE give rise to these noteworthy results reported in Nature this week in a back-to-back publication alongside a similar study by the group of Dmitry Basov in UCSD in California. Along with nanoGUNE, other Basque research centers, the Center of Material Physics, the Donostia International Physics Center, as well as the Ikerbasque Foundation and nanoGUNE’s start-up company Graphenea, have contributed to this work as well.

Figure: Optical nanoimaging of graphene plasmons. Upper panel: Sketch of the imaging method. A laser illuminated scanning tip launches plasmons on graphene. Detection is by recording the light backscattered from the tip. Lower panel: Optical image of graphene, where the fringes visualize the interference of the graphene plasmons

Graphene is a material that, among many other fascinating properties, has an extraordinary optical behavior. Particularly interesting optical properties had been predicted for the case that light couples to so-called plasmons, wave-like excitations that were predicted to exist in the “sea” of conduction electrons of graphene. However, no direct experimental evidence of plasmons in graphene had been shown up to this work. This is because the wavelength of graphene plasmons is 10 to 100 times smaller than what can be seen with conventional light microscopes. Now, the researchers show the first experimental images of graphene plasmons. They used a near-field optical microscope that uses a sharp tip to convert the illumination light into a nanoscale light spot that provides the extra push needed for the plasmons to be created. At the same time the tip probes the presence of plasmons (see figure). Rainer Hillenbrand, leader of the nanoGUNE group comments: “Seeing is believing! Our near-field optical images definitely proof the existence of propagating and localized graphene plasmons and allow for a direct measurement of their dramatically reduced wavelength.” 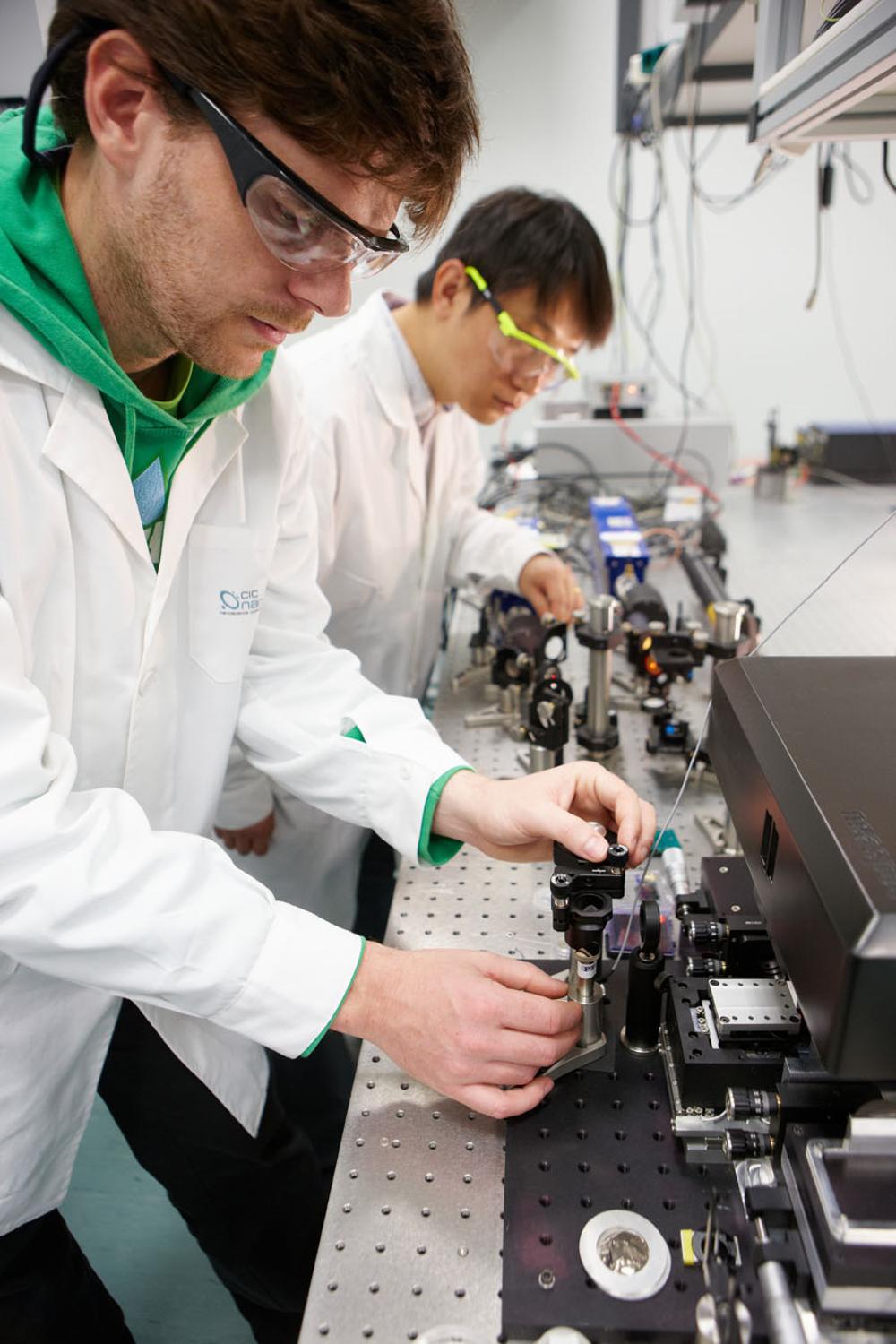 As demonstrated by the researchers, graphene plasmons can be used to electrically control light in a similar fashion as is traditionally achieved with electrons in a transistor. These capabilities, which until now were impossible with other existing plasmonic materials, enable new highly efficient nano-scale optical switches which can perform calculations using light instead of electricity. “With our work we show that graphene is an excellent choice for solving the long-standing and technologically important problem of modulating light at the speeds of today’s microchips,” says Javier García de Abajo, leader of the IQFR-CSIC group. In addition, the capability of trapping light in very small volumes could give rise to a new generation of nano-sensors with applications in diverse areas such as medicine and bio-detection, solar cells and light detectors, as well as quantum information processing. This result literally opens a new field of research and provides a first viable path towards ultrafast tuning of light, which was not possible until now. Frank Koppens, leader of the ICFO group, summarizes: “Graphene is a novel and unique material for plasmonics, truly bridging the fields of nano-electronics and nano-optics”.