The global management and organization of nanoGUNE are carried out along the lines displayed in the chart below, which shows the key roles of the center. 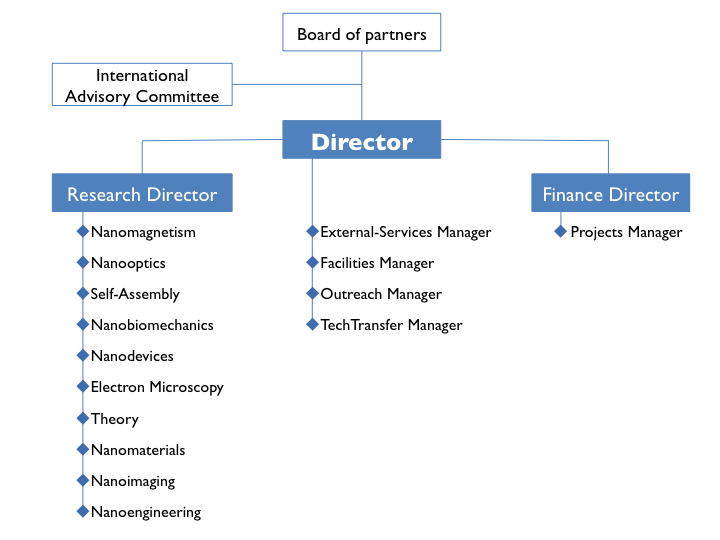 This person is the head of the Center and the major responsible for its overall design, strategy, and performance. Other key roles in the Center’s general operation and management report to the Director.

Prof. José María Pitarke has been the director of nanoGUNE since its creation in 2006.

J. M. Pitarke studied physics at the University of the Basque Country, where he received his PhD degree (with distinction) in 1990 studying some aspects of tunneling spectroscopy and electron and photon emission in solids. After a postdoctoral stay at Oak Ridge National Laboratory (USA) he obtained, in 1993, a tenured position at the University of the Basque Country, which he combined with sabbatical semesters at various USA Universities and the Imperial College of the University of London, UK. Since 2000, he has been full professor of condensed matter physics.In 2005, he was elected By-Fellow of Churchill College of the University of Cambridge. His research interests include condensed matter theory, and many-electron interactions at solids' surfaces and nanostructures. Hardly a few months after the opening of nanoGUNE in January 2009, a special mention by the jury of the 9th Manuel Laborde Werlinden prize went to him for his business initiative on graphene. In April 2010, he co-founded nanoGUNE’s first start-up company Graphenea, as a joint venture of private investors and nanoGUNE, with the mission of commercializing good-quality graphene wafers and developing graphene-based technologies. He has been vicepresident of Graphenea until April 2015. Now he is president of the spin-off companies Simune, CTECH-nano, and Evolgene.

Dr. Andreas Berger is the research director of nanoGUNE since 1 July 2007. He is also the group leader of the nanomagnetism research group. Dr. Berger received his PhD (with distinction) in 1993 from the Technical University (RWTH) Aachen in Germany, where he worked on surface characterization and modification. From 1993 to 2001, he worked at various USA Universities and Argonne National Laboratory. In 2001, he moved to IBMs Almaden Research Center where he worked until his transfer to Hitachi Global Storage Technologies (HGST) in 2003. In HGST, Dr. Berger was responsible for conducting technical feasibility studies of novel thin-film structures for disk-storage applications and complementary scientific research efforts on novel magnetic materials and deposition processing. Dr. Berger was awarded the Research Visitor Fellowship (American Nuclear Society) in 1991, the Feodor Lynen Research Fellowship (Alexander von Humboldt-Stiftung) in 1993, the BorchersMedal (RWTH Aachen) in 1994, and the Guest Lectureship by the Research Center Julich in 1999.

Miren Alberdi is nanoGUNE's Finance Director. She is responsible for the accounting, administrative, financial, and human resources of the Center.

In addition to assisting the Director, this person gives administrative support to the Center.

This person is responsible for the operations and maintenance of the base-building facilities. This person is also in charge of the data and information-system networks.

This person is responsible for managing the project portfolio of the Center.

This person is responsible for the issues related to technology transfer.

This person is in charge of the External-Services of the Center.

Group Leaders are responsible for the management of the research groups and laboratories. In coordination with the Research Director, they establish their research topics and recruit post-docs, pre-docs, and technicians for their respective laboratories. They are also responsible to maintain the corresponding facilities and equipment operative and upgraded.

They are part of nanoGUNE’s permanent staff. They can carry out their own research, typically within one of the existing research groups.

They are temporary personnel (Ikerbasque or Ramón-y-Cajal) who carry out their research activity at nanoGUNE with a temporary contract. The duration of these contracts is of up to 5 years.

They are temporary personnel who carry out their post-doctoral research activity at nanoGUNE with a temporary contract. The duration of these contracts is of up to 3 years.

They are temporary personnel who carry out their pre-doctoral research activity at nanoGUNE with a temporary contract focusing on the completion of a PhD thesis. The duration of these contracts is of up to 3 years.

They can be part of nanoGUNE’s permanent staff. They are in charge of the operation and maintenance of the research laboratories (including the cleanroom) and equipment.

These persons give secretarial and administrative support to the Center.

The global management and organization of nanoGUNE are described in the organization chart, which shows the key roles of the center.

Since its foundation in 2006, nanoGUNE has obtained an important amount of competitive funding from the local Governments, Industry, and the European Union.