The nanoGUNE researcher Pablo Alonso-González has been awarded the RSEF-BBVA Foundation 2014 prize for Physics in the New Researchers in Experimental Physics category. Alonso-González works in this center’s Nanooptics group in Donostia-San Sebastian and his research is currently focussing on the optical properties of graphene at the nanoscale. The researcher was the first to obtain guided light imaging in this material with nanometric precision, and his work was published by the journal Nature. 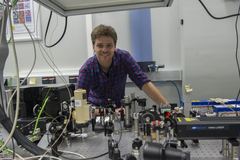 After getting his PhD, he began to work as a post-doctoral researcher in the Nanooptics group of nanoGUNE led by the Ikerbasque researcher Rainer Hillenbrand, where he is now doing his research work. Some of his pieces of work on the optical properties of nanoscale graphene have been published in journals of major international prestige like Nature and Science. In an article recently published in Science, he showed experimentally that confined nanoscale light in graphene obeys the laws of conventional optics, which constitutes the first step towards the development of two-dimensional nanooptics.

The Royal Spanish Society for Physics (RSEF), founded in 1903, began to award these prizes in 1958 to recognize creativity and effort and to encourage researchers, young ones in particular. The awards are divided into the following sections: The RSEF Medal, totalling 15,000 euros; New Researcher, in two categories, Theoretical Physics and Experimental Physics, each worth 4,000 euros; Physics Education and Popularisation in two categories, University Education and Secondary Education (8,000 euros each); Physics, Innovation and Technology (8,000 euros); Best Papers in RSEF publications (two prizes, one for education and the other for research, each worth 1,500 euros). The BBVA Foundation has been collaborating with the RSEF since 2007 in these prizes which are awarded every year.