A team of international scientists led by researchers of the CUNY Advanced Science Research Center (ASRC) and the Politecnico of Milan, and involving researchers from nanoGUNE, has demonstrated a novel approach for designing fully reconfigurable magnetic nanopatterns whose properties and functionality can be programmed and reprogrammed on-demand. The research has been featured on the June 2016 issue of Nature Nanotechnology. 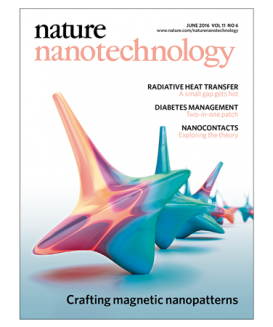 The method - published online in march 2016 in Nature Nanotechnology - is based on thermal scanning probe lithography and uses a hot nano-tip to perform a highly localized field heating and cooling in antiferromagnetic and ferromagnetic thin films. The hot tip is then used to align the spins in the material in any desired direction with nanoscale resolution.

"The proposed technique is straightforward and combines the full reversibility and stability of exchange bias, as the same pattern can be written and reset many times, with the resolution and versatility of scanning probe lithography," said Elisa Riedo, Professor of Physics with the ASRC's Nanoscience Initiative. "In particular, this work demonstrates how thermal scanning probe lithography is gaining momentum as a key nanofabrication method for the next generation of nanodevices, from biomedical sensing to sprintronics."

This approach offers researchers the opportunity to control magnetism at the nanoscale as never before. The authors used this method to fabricate channels where spin waves can propagate. Spin waves are a propagating re-ordering of the magnetization in a material. A new generation of computing and sensing devices can be fabricated based on the propagation of spin waves instead of the more conventional electric current.

Riccardo Bertacco, a professor with the Politenico of Milan, noted these findings will allow for the development of novel metamaterials with finely-tuned magnetic properties, as well as a reconfigurable computing device architectures.

"Equally promising is the creation of structures with high response to external magnetic fields, as they can be used as sensors in new architectures of spintronic devices," he said. "The potential target market for these devices is extremely large--especially with the advent of the age of the 'Internet of things'--in which every object has a growing need for integrated sensors and computational capacity."

"So far, the patterning of magnetic nanostructures has been mainly achieved through irreversible structural or chemical modifications," Albisetti said. "On the contrary, by using this new thermal assisted magnetic scanning probe lithography (tam-SPL) method, the magnetic nanopatterns are fully reconfigurable and obtained without modifying the film chemistry and topography."

The ability to draw new meta-magnetic materials opens the way for the development of innovative devices for information processing based on logic cells as well as on the propagation and manipulation of spin waves in magnonic structures.