NanoGUNE researchers in collaboration with the Autonomous University of Madrid and the Institut Néel of Grenoble have shown for the first time that the simple absorption of a hydrogen atom on a layer of graphene magnetises a large region of this material. By selectively manipulating these hydrogen atoms, it is possible to produce magnetic graphene with atomic precision. The work has been published in the prestigious journal Science. 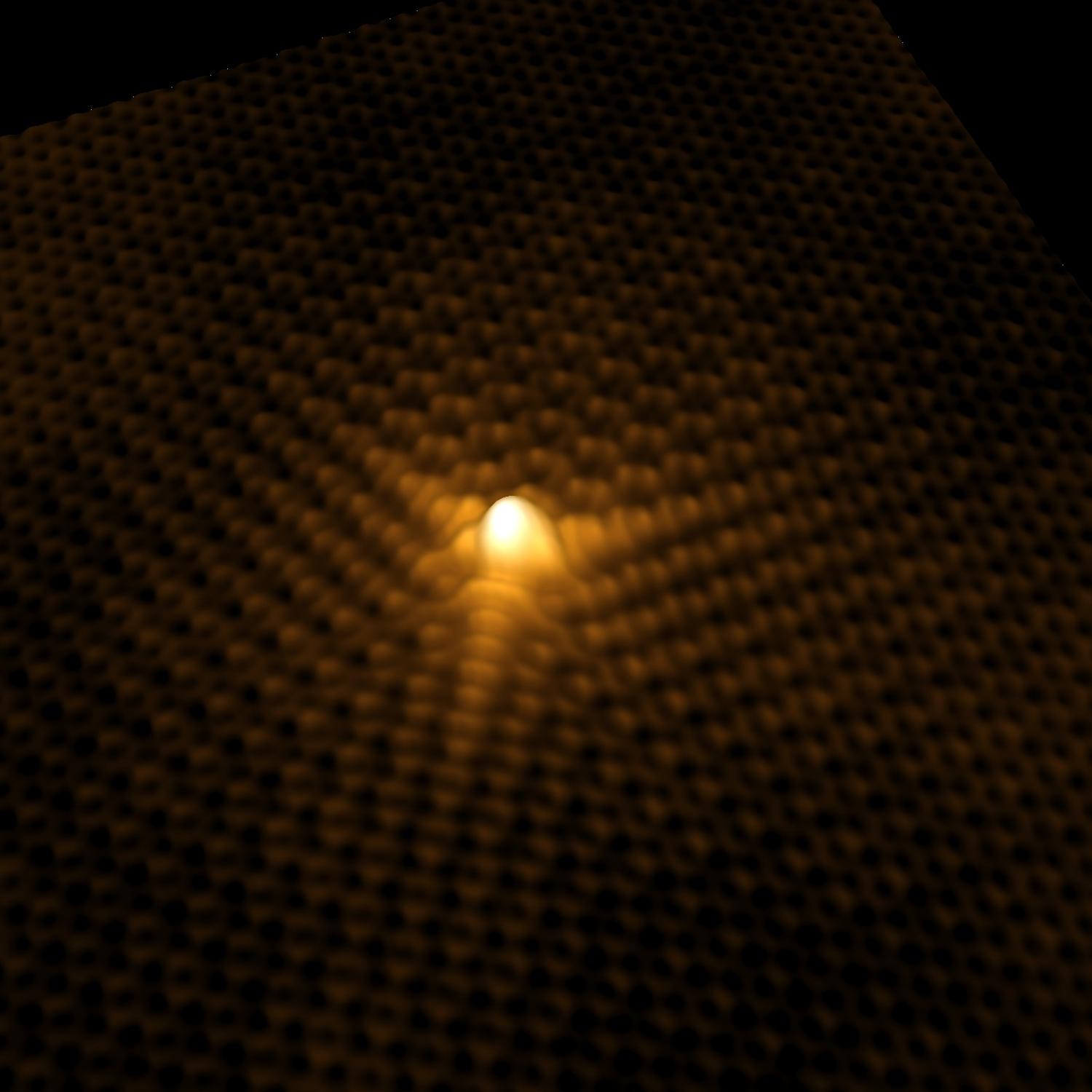 Graphene, a sheet one atom thick made up of carbon atoms, has a huge number of qualities but lacks magnetic properties. Yet the hydrogen atom has the smallest magnetic moment. The magnetic moment is the magnitude that determines how much and in what direction a magnet will exert force. “In other words, we can all remember having held a magnet in our hands and seeing how it was capable of attracting or repelling another magnet at a certain distance, which was greater or smaller depending on its power. Well, what really determined this behaviour was the magnetic moment of our set of magnets. The distance at which we began to feel the appearance of a force was specified by the spatial extension of their magnetic moments, and the fact that the force should attract or repel depended on the relative orientation between them; that is why when one of the magnets was turned round, they then attracted or repelled each other or vice versa,” explained Miguel Moreno Ugeda, Ikerbasque Fellow at nanoGUNE.

“Our work reveals how when a hydrogen atom touches a graphene layer it transfers its magnetic moment to it," said Moreno. “In contraposition to more common magnetic materials such as iron, nickel or cobalt, in which the magnetic moment generated by each atom is located within a few tenths of a nanometre, the magnetic moment induced in the graphene by each atom of hydrogen extends several nanometres, and likewise displays a modulation on an atomic scale,” he added. The experiments were carried out with the help of a tunnel-effect microscope. This microscope allows matter to be imaged and manipulated on an atomic scale. Likewise, the results show that these induced magnetic moments interact strongly with each other at great distances (compared with the atomic scale) while also abiding by a particular rule: the magnetic moments are added or neutralised depending critically on the relative position between the absorbed hydrogen atoms. What is more, and of equal importance, is that “we have managed to manipulate the individual hydrogen atoms in a controlled way, and this has enabled us to freely establish the magnetic properties of selected regions of graphene,” stressed Moreno.

In the quest for magnetism

Ever since 2004 when it was first possible to obtain graphene, laboratories across the world have been trying to add magnetism to the long list of properties of this purely two-dimensional material. This interest arises mainly out of the fact that graphene is, a priori, an ideal material for use in spintronic technology. This promising technology is aiming to replace traditional electronics by transmitting both magnetic and electronic information at the same time, which could give rise to a new generation of more powerful computers. So “the results obtained in this work, which indicate the possibility of freely generating magnetic moments in the graphene and showing how these moments can communicate with each other over great distances, are paving the way for a promising future for this material in the emerging field of spintronics,” concluded Moreno.

Video explaining the results of the research in a didactic way: