Libe Arzubiaga, Pre-doctoral Researcher at the Nanodevices Group at nanoGUNE, receives her PhD at the University of the Basque Country (UPV/EHU) after the defense of her thesis project on Monday 16 March 2015. Her research work, entitled “Nanostructuring of Devices for Nanoscience Applications”, has been developed under the supervision of the Nanodevices Group Leader and Ikerbasque Research Professor Dr. Luis Hueso. 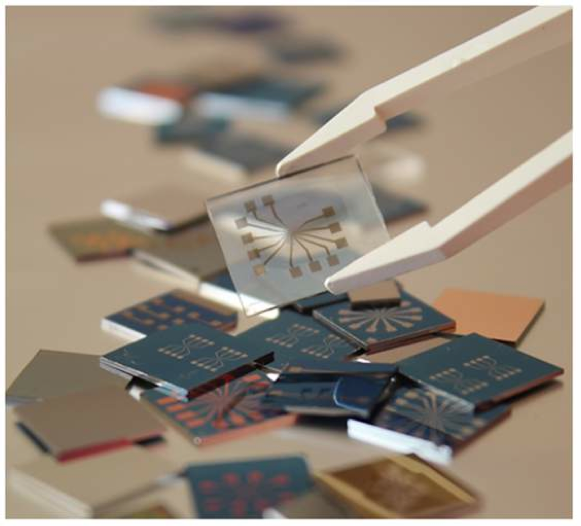 Arzubiaga has focused her thesis on the fabrication of nanostructured devices for applications in different fields of nanoscience, from plasmonics to spintronics and nanoelectronics.

The researcher first optimized the electron beam lithography process on substrates with different mechanical or electrical properties, such as insulating oxides, pyrex, or electron-transparent silicon nitride membranes, achieving minimum sizes of around 20 nm for constrictions and nanogaps. She also prepared electronic devices on graphene, including substrate preparation by physical exfoliation of graphite flakes at a whole wafer scale, utilising, in this case, a high energy electron beam (working at 100 kV), with which structures with minimum sizes or around 10 nm could be achieved.

On the other hand, Arzubiaga optimized the nanostructuring of devices by electromigration, as a technique complementary to electron beam lithography. This technique consists on breaking metallic wires of nanometric cross-section by electrical fatigue, allowing obtaining structures that are beyond the capabilities of most state-of-the-art lithographic techniques. Nanogap electrodes, nanoconstrictions, and quantum dots are some examples of the obtained structures.

Finally, Arzubiaga combined all the optimized fabrication methods for obtaining single-electron transistors and spintronic devices. On one hand, she obtained palladium-based devices (including pure palladium and nickel palladium alloy) showing single electron transport characteristics at liquid-helium temperature. These devices were intended for the study of electronic correlations in metals and alloys.On the other hand, lateral spin valves with nanoconstrictions were fabricated. In these devices pure spin currents are created and transported through a non-magnetic metallic channel, which consisted of a constricted copper nanowire. She patterned these constrictions by electron beam lithography and then modified them by electromigration. After consecutive electromigration stages, in which the constriction was gradually narrowed, the evolution of the spin current, was measured. This still unfinished project aims at studying the transport of pure spin currents through nanostructured metallic channels containing either nanoconstrictions, nanogaps, or quantum dots.