NanoGUNE has its R&D&i management system certified in accordance with the UNE 166002:2014 Standard 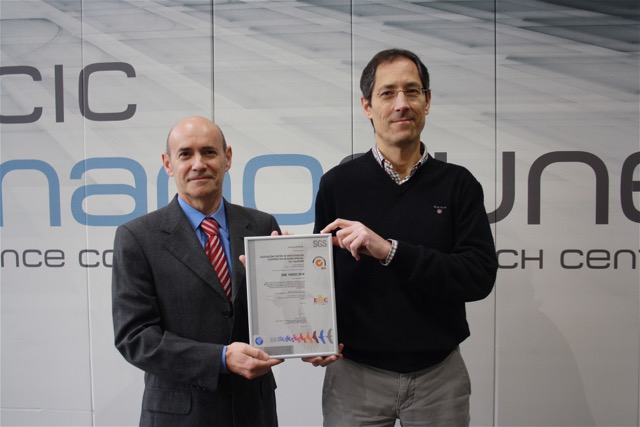 The awarding of the certificate constitutes recognition of the Center’s excellence in the field of research management and technology transfer. What is more, the system deployed at nanoGUNE is geared towards quality in management and ongoing improvement, with the ultimate aim of putting the Basque Country at the cutting edge in nanoscience and nanotechnology.

The management system aims to optimize all the processes relating to R&D&i activity and make them more efficient. In this context, nanoGUNE has deployed a management policy as well as various processes and procedures geared towards ensuring the efficient management of all the research projects it runs.

José María Pitarke, the CEO of nanoGUNE, pointed out that “our commitment is to combine excellence research with the constant quest for potential applications and opportunities that the development of nanotechnology may offer us, thus contributing towards the competitive development of the Basque Country and the entire satisfaction of the interested parties, among which stand out our own employees, our industrial environment, the public institutions and the whole of society in general; all this while ensuring the ongoing quest for best practices and compliance with the requirements applicable, including those arising out of the UNE 166002:2014 Standard, which underpins our R&D&i management system”.

SGS is a global leader in inspection, verification, analysis and certification. It is regarded as the main global reference in quality and integrity, and has over 90,000 employees and a network of over 2,000 offices and labs across the world to offer companies independent services that enable risks to be limited, processes to be streamlined and operations to take place more sustainably. 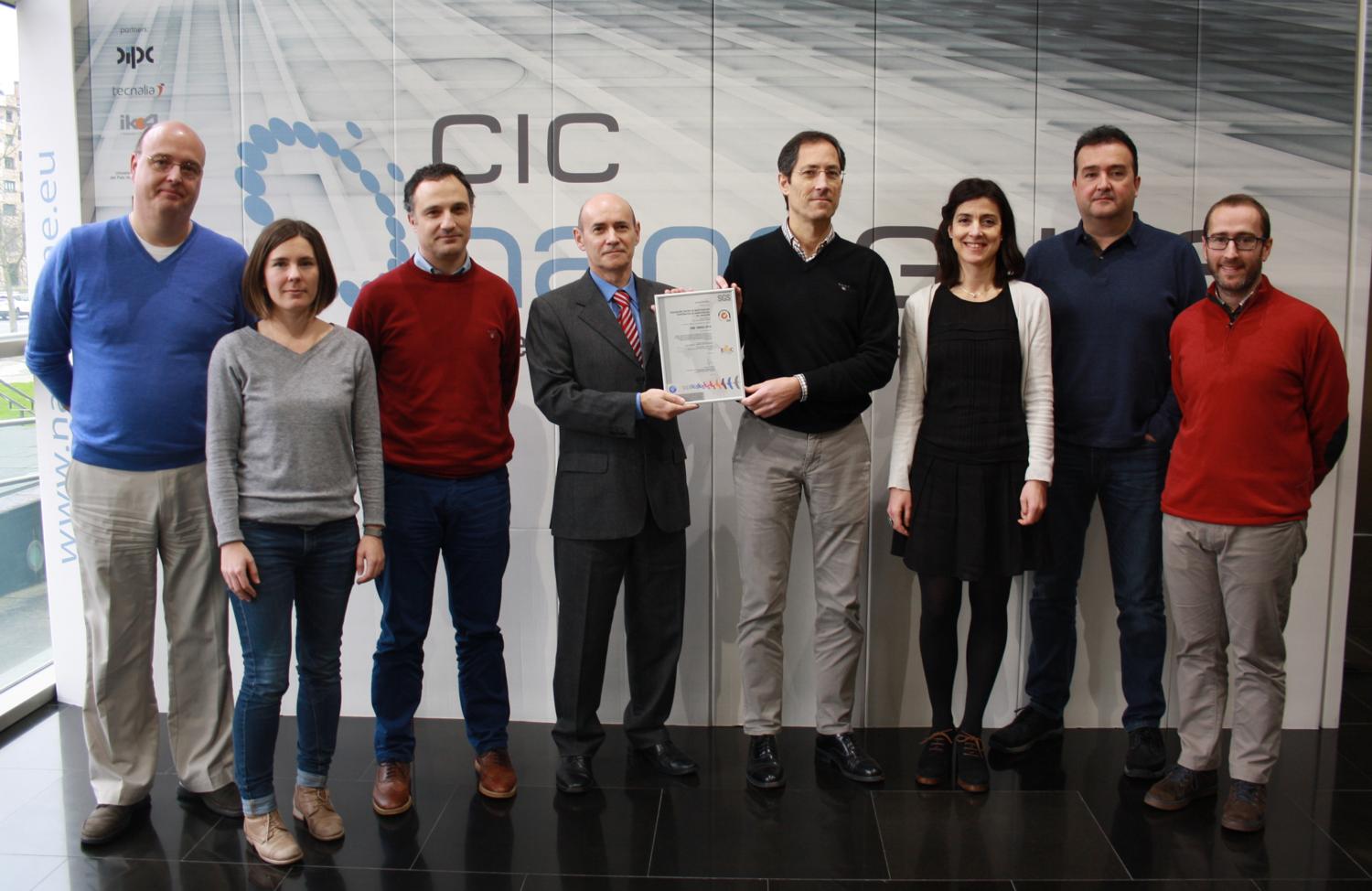 In a recent event in Madrid, the alliance of the Severo Ochoa and María de Maeztu research centres and units (SOMMa) expressed its concern about the reduction of financing for R+D+I, and the administrative problems that constrain Spanish science. As well, the alliance presented the “SOMMa Position Paper: Actions required to safeguard science competitiveness” to all Spanish parliamentary groups in order for them to address these problems as soon as possible.

Now, for the first time, organizations linked to business and R+D+I in Spain express their support towards Spanish research, and towards the initiative promoted by SOMMa. In particular, they stress the need for adequate, specific regulations within the framework of the European regulations, safeguarding the competitiveness of the research sector, as happens in other countries. As well, they insist on the need to make science a priority, and to promote innovation, allowing knowledge to translate into tangible benefits for society.

SOMMa has received the support of the most relevant industrial associations and organizations linked to R+D in Spain. These include the biotech sector, represented by the Spanish Bioindustry Association (ASEBIO); the sector of the digital technology industry, represented by the Association of Electronics, Information Technology, Telecommunicacions and Digital Contents Businesses (AMETIC); the aerospace sector, represented by the Spanish Association of Defence, Aeronautic and Space Technological Companies (TEDAE). As well, SOMMa has the support of the COTEC Foundation for Innovation (COTEC), which promotes innovation as a driver for economic and social progress, and the Confederation of Scientific Societies of Spain (COSCE), which calls for coherent, efficient and transparent science policies. SOMMa has, in addition, the support of the Network of Research Entities in Management of Clinical, Health and Hospital research (REGIC) as stated in this release.

All these entities, together with the members of SOMMa, represent close to 6,800 businesses, centres and research units that give employment to more than 500,000 workers, and which have an economic activity equivalent to 10.53 % of Spanish gross domestic product.

“It is not only a matter of defending science from the point of view of research institutions. Science is the motor of economy, the business sector is convinced about it, and supports us in this call for all political parties to decisively support research,” expresses Luis Serrano, director of the Centre for Genomic Regulation (CRG), and president of SOMMa. “It is urgent that steps are taken to safeguard the competitiveness of science, and by extension, of the Spanish economy. For that, we need to unlock the resolution of the administrative problems currently affecting R+D entities, and to increase the investment in R+D+i”, he finishes.

“Without science it is impossible for our country to be competitive, and for our businesses to innovate. ASEBIO wants to support all initiatives focusing on bringing science to public and political debate, and from that stems our commitment and support to SOMMa. We consider that the moment has come to lay the foundations of a new model of public financing for R+D+i and for a stable regulatory framework reflecting a decided strategic support for R+D, with a mid- and long-term vision, and a wide political consensus,” explains Ion Arocena, general director of ASEBIO.

From the ICT sector, Pedro Mier, president of AMETIC, said “the TIC sector, in our country but also internationally, is one of the most relevant actors regarding R+D+i, which is key for the productivity and competitiveness of businesses. Any country aiming at promoting high added-value employment and at bolstering salary growth must invest into knowledge generation”. He continued stating that, “technology-based innovation, so relevant in this new industrial revolution, requires of a strong scientific system which is well-connected to business. Such a system is not improvised, and is the result of a sustained effort which reflects a long-term political commitment, and a shared, common project for our country, something which we do support.”

The associations Feique and Farmaindustria also shared the concerns expressed by SOMMa regarding the problems that R+D+I faces in Spain. In a joint statement made public some weeks ago, they explicited their commitment towards R+D -hence with the centres devoted to research, and with the public-private collaborations in that field-. In that statement, they joined the appeal to facilitate a discussion by politicians and officials. This, to allow for the taking of structural measures to promote research in Spain, with a strategic and long-term vision, and particularly, in the biomedical, pharmaceutical, chemical and biotechnological fields.

Entities and associations supporting the initiative (complete names, in Spanish):

SOMMa is constituded by 25 centres and 16 units distributed over the Spanish territory, and which cover all scientific disciplines from the life sciences, humanities and social sciences, to mathematics, engineering and experimental sciences. As a whole, SOMMa members assemble more than 7,000 staff devoted to research, train more than 500 Ph.D. graduates yearly and their obtained financing for European projects represents an approximate economic return of 530 million Euro over a 5-year period. In the year 2016 alone, SOMMa published more than 5,800 articles in the best scientific journals, gave place to 8 new spin-off companies, more than 100 patent applications, and close to 350 collaborations and contracts with companies. 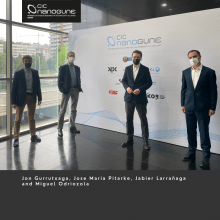 Representatives of the Gipuzkoa Council have been joined by the Director General of nanoGUNE, Jose Maria Pitarke, and the Finance Director Miguel Odriozola. During this visit, we could speak about the high level research carried out at nanoGUNE and about our contribution to innovation in the industrial sectors of the region.